Charles Macdonald founded The Academy of St Olave’s in 1978 whilst he was Organist and Director of Music at St Olave’s Church.

Charles Macdonald founded The Academy of St Olave’s in 1978 whilst he was Organist and Director of Music at St Olave’s Church.

There were two very good reasons for his doing so. First was to help raise money for necessary repairs to be done to the fine Walker organ: Charles cared about the instrument (then 71 years old) and knew that major work was needed for it to be able to survive the century. Secondly he, along with Robin Gilbert (the founding leader of the orchestra), wished to provide a good training ground for promising young orchestra players. Charles cared about the musical education of the young and The Academy continues to uphold this founding principle.

Charles came to St John’s College, York, for post-graduate study and was soon involved in the Minster music, becoming an organ scholar under Dr. Francis Jackson as well as a Deputy Songman. Later he became an assistant organist at York Minster. During his years in York, Charles held teaching appointments at Archbishop Holgate, Bootham and Malton schools.

He left York in the early 1980s, moving to Cranleigh School in Surrey, where he became Organist and Librarian and occasionally deputised at Guildford Cathedral. On moving to Steyning in Sussex, Charles founded Macdonald Music Service, a retail outlet in the High Street specialising in church and keyboard music. He was appointed Organist to the University of Sussex and made frequent visits to Rodean and St Mary’s Hall, as well as Lancing, Worth Abbey and Boundstone Community College. In addition, Charles became Organist at St Botolph’s, Botolphs in 1999, where it was a real delight to him to be back on the organ bench at an ordinary little parish church.

Charles was astonished to discover, shortly before his death in 2001, that the orchestra he had founded so long before was still playing and in very good heart. 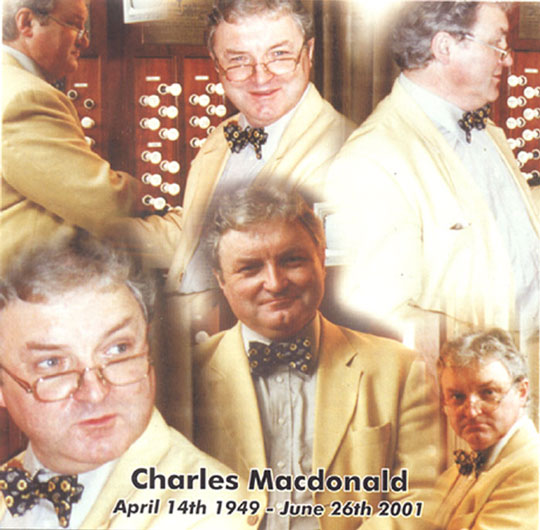