The Academy was founded in 1978 by Charles Macdonald, Organist and Director of Music at St Olave’s Church, in conjunction with local headmaster-violinist, Robin Gilbert. The reason was to raise money for essential work to be done on the very fine organ at the church.

The first concert was given on 8 January 1978 and was preceded by a brief article in the Evening Press: 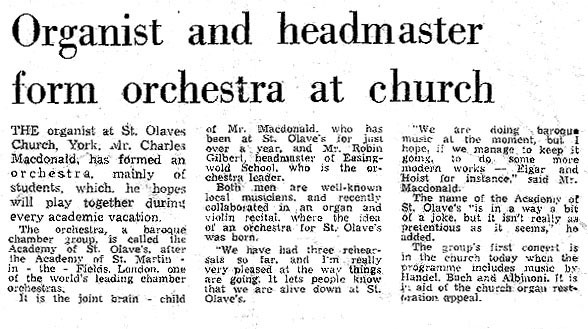 This photograph suggests that St Olave’s was not a warm rehearsal environment in the depths of winter! Nothing has changed; and the organ has recently had more extensive work done: plus ça change, plus la même chose.

Once funds had been raised for the organ, The Academy of St Olave’s was sufficiently well-established in the musical calendar of York for it to continue to give concerts. After Charles Macdonald moved from York in the early 1980s his successor, Chris Liddle continued with the orchestra, occasionally adding wind players as and when needed, a practice which further developed when Andrew Wright became Musical Director in 1989.

By the time John Hastie was appointed as Musical Director in 1997 the Academy had become a chamber orchestra and it adopted the policy of playing for the Solemn Requiem Mass on Remembrance Sunday offering the Requiem settings by Fauré and Duruflé on alternate years.

Charles Macdonald (harpsichord) and Robin Gilbert (leader) with some of the Academy’s violinists rehearsing in St Olave’s Church on 31st December 1977 in preparation for the first concert on 8th January 1978.