The Academy of St Olave’s has been supporting Jessie’s Fund for many years. Our concert on 27th June is for the charity’s 20th anniversary.

When Jessica George was diagnosed with a brain tumour aged 9, Jessie’s Fund was set up to meet the cost of complementary treatment in the USA.  Sadly Jessie died in 1994 before she could travel to the States, and the fund become a charity dedicated to helping seriously ill and disabled children through the creative and therapeutic use of music.

Twenty years later, Jessie’s Fund is celebrating its achievements and raising money for its continuing work with a series of events.  2015 was kicked off in fine style with the York charity calling on Yorkshiremen to make one of their New Year’s resolutions a Jessie’s Fund challenge! 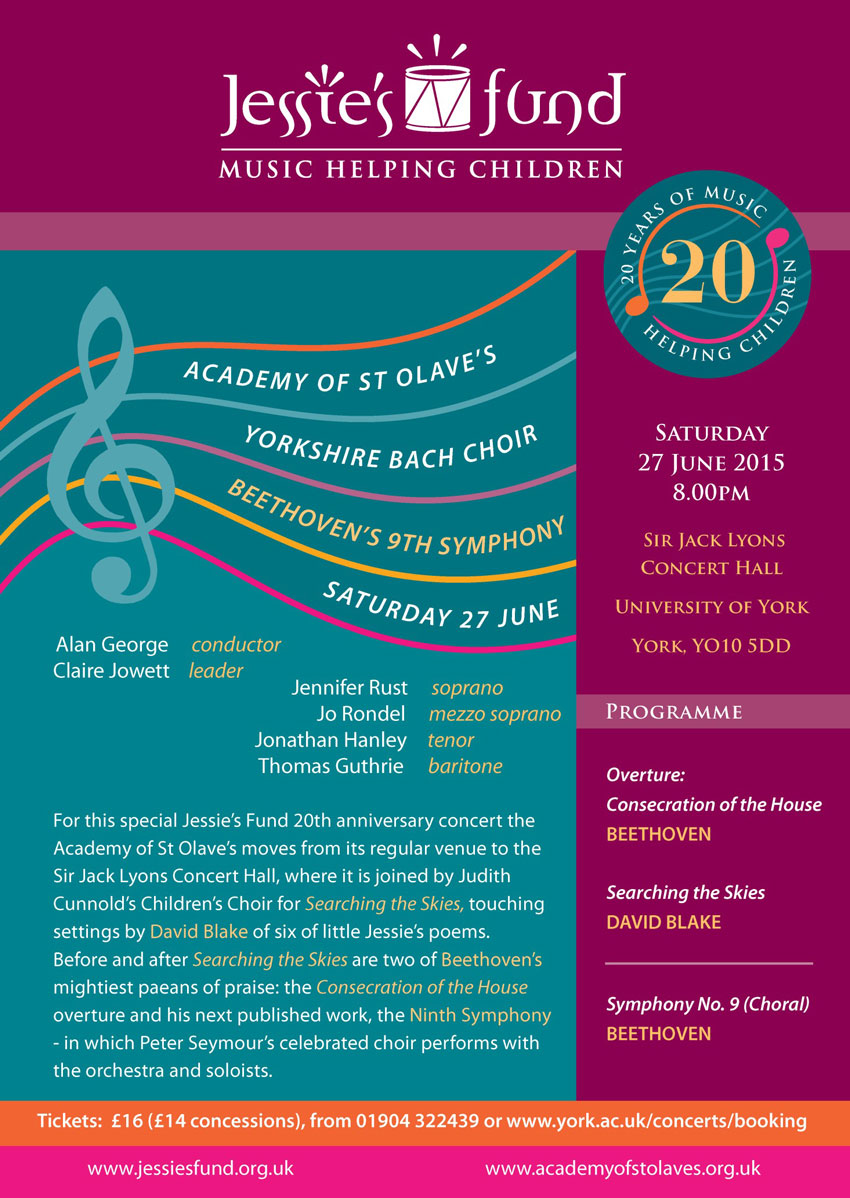 The Academy of St Olave’s concert on 27th June in the Sir Jack Lyons Concert Hall is part of the Jessie’s Fund series of 20th anniversary events.  The Academy is privileged to have Jessie’s parents at the helm – both are well known professional musicians.  Alan has been Musical Director of the orchestra since 2009.  Lesley plays clarinet and leads the wind and brass sectional rehearsals.

This concert is a real tour de force: the Beethoven “Choral” Symphony requires a larger orchestra than usual, the Yorkshire Bach Choir are performing, there is a children’s choir singing six of Jessie’s poems set to music by David Blake, and we have four stunning soloists.  Judith Cunnold has been having great fun training the children and will be singing with them.  Peter Seymour, Director of the Yorkshire Bach Choir, is a near neighbour of Alan and Lesley George, making it easier for quick conversations about tempi etc!  With all these extra people involved, the Academy of St Olave’s has had to explore larger rehearsal venues and a bigger concert hall.

The great thing about this venture is that it is also a reunion for the orchestra, Jessie’s Fund and some of the singers.  Tom Guthrie and Judith Cunnold used to sing for the Academy of St Olave’s on a regular basis when Andrew Wright was Musical Director in the 1990’s.  Tom, Judith and Jo Rondel also sang in some early Jessie’s Fund productions: Marriage of Figaro (1998, Guildhall); Don Giovanni (1999, Guildhall); The Creation (staged performance! in St Olave’s, 1999).  Many of the orchestral players for those early Jessie’s Fund events also came from the Academy of St Olave’s, fixed by cellist Sara Stancliffe (another near neighbour of Alan and Lesley!).

For the last few years, Lesley and Alan have organised some long distance cycle rides in the summer to raise more funds for Jessie’s Fund. This year they are planning to cycle 300 miles in 4 days. Please sponsor them if you can – every £1 helps. https://mydonate.bt.com/fundraisers/lesleyandalan300